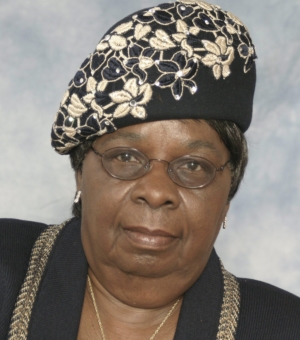 Her Christian experience began as a child. She attended the Mt. Zion AME Church Sunday School. Because of her interest and dedication, she represented her church as a delegate to many conventions. The presiding Elder remarked, “This child will one day be a great leader; she has a mark on her life.”

At the age of fifteen, June 26, 1941, the very lovely Willie Mae Smalls was united in holy matrimony to Mr. David Rivers. Their marriage lasted just short of 56 years until his demise May 15, 1997. This union was blessed with twelve children; two sons and daughters.

In 1946, Mother Rivers attended a revival one night and after hearing the gospel preached (by the husband and wife team, Supt. Jacob C. & Missionary Francena Dantzler) she believed and was baptized in the Holy Ghost.

Mother Rivers became a member of the Calvary Church of God in Christ. She was appointed Church Mother at the age of twenty (20). She continues to serve in that capacity.

Because of her dedication, Mother Rivers was chosen to serve as District Missionary and later Assistant Supervisor to the late Mother Alice Marie Saunders. In 1968, she was appointed and is presently the Supervisor of the Department of Women for the South Carolina Jurisdiction. Her loyal dedication to God and her leaders is exemplified throughout the Church of God in Christ, Inc.

Mother Rivers has served on the National level in the following capacities:

Mother Rivers was appointed and installed as the International General Supervisor in April 1997.

Since her appointment as General Supervisor, Mother Rivers has been featured in the May 1999 edition of Charisma and on February 3, 2000, she had her first appearance on the 700 Club. She made a special guest appearance on TBN in May of 2005.

She continues to minister to the needs of individuals in her community. Mother Rivers has sponsored and spread the Gospel for several years through the “Evangelist Speaks” ministry on WTUA 106.1 FM (St. Stephens, SC) and WBBP 1480 AM (Memphis, TN) radio stations. The Evangelist Speaks radio ministry recently joined WJNI 106.3 FM (North Charleston, SC).

Mother Rivers is also the founder and president of the Community Christian Women & Men Fellowship, which was organized to reach people in all walks of life. Giving all praises to God, this fellowship has been a blessing to many souls through spiritual enrichment. Aid is provided for those less fortunate and the bereaved receive love and comfort during their time of sorrow.

Mother Rivers is a true servant of God and she touched the life of her sons, the late Robert Lee Rivers and Samuel Rivers. She continues to touch the lives of her ten daughters, twenty grandchildren, thirty-six great-grandchildren, three great-great grand, three sisters, uncles, aunts, many cousins, her community and the Grand Ole Church of God in Christ Family.