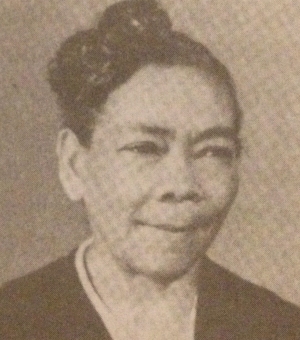 Mother Coffey, “Little Lillian” as she was called, was a Dreamer.  She was a woman with a great vision. When she was a small child, Bishop Mason was invited to their home by her grandfather who was a Baptist minister. When Bishop Mason started his church in Memphis, she and other neighborhood children were carried to Sunday School and services, which were held in a tent across the street from where she lived. One Sunday morning he came and taught them about Jesus in a child like manner. The Lord touched and saved little Lillian beginning her life in church under Bishop Mason where she remained until her demise in 1964. As she grew older, Bishop Mason continued to influence her life. She read the bible through once every year, a practice she continued even after reading it eleven times.

She traveled with him reading and singing while he preached. When her parents died, he became her father. She worked as secretary in his office for twenty-one years and as assistant financial secretary until her appointment to General Supervisor in 1945.

Mother Coffey was one of the greatest leaders and organizers that ever lived. She continued to build the existing auxiliary programs and began to organize the units and helps for the Department of Women. Some of the units that were organized during her administration: Missionary Circle, Hospitality, Executive Hospitality, Hulda Club, Wide Awake Band, Minister’s Wives Circle, Deaconess, Deacon’s Wives Circle, Prayer Warriors, Young Women’s Christian Council, Usher Board, Educational Committee, Boy’s League, Big Brothers, Cradle Roll, Women’s Chorus, Board of Examiners, Public Relations, News Reporters and the Burners which was her pet project. During the convention banner march, burners marched with lights symbolizing that lights were to lighten the darkened world of Africa.

She was the founder of the Lillian Brooks Coffey Rest Home in Detroit, Michigan. Mother Lillian Brooks Coffey is best remembered for her work in 1951, when she organized the Women’s International Convention held in Los Angeles, California hosted by Mother L.O. Hale and Bishop S.M. Crouch.

This convention was born through a dream she had of a better way to support missions. Her heart was burdened over the condition of suffering foreign Missionaries and their various fields. One hundred women who paid $100.00 each, the cost of the Red Card registration, rode the Coffey train to the convention in 1951, carrying their money, $10,000, in a brown paper bag. She presided over 14 conventions, 1951-1964.