Church of God in Christ and the U.S. Fund for UNICEF Launch New Initiative as Part of Ongoing Partnership

New York (August, 2016) – The Church of God in Christ (COGIC) and the U.S. Fund for UNICEF have developed and produced two new Direct Response TV (DRTV) spots with both Bishop P.A. Brooks and his daughter, Evangelist Faithe Brooks. Bishop Brooks is the First Assistant Presiding Bishop of COGIC and Evangelist Faithe Brooks is a noted Evangelist who has performed as singer and lecturer around the world in regard to the teachings of Christianity. The new DRTV ads will air every Sunday on the Word Network at 3:00 p.m. (EST) through to at least the end of the year.

The DRTV campaign is part of an ongoing partnership between the U.S. Fund for UNICEF and COGIC, which aims to engage faith-based communities to support UNICEF’s lifesaving work on behalf of the world’s most vulnerable children. In 2015 the joint campaign, I AM #STOPPINGEBOLA raised $100,000 in support of UNICEF’s work to halt the spread of Ebola in Liberia.

“We are thrilled to launch this new production endeavor with COGIC, who have proven to be a great partner over the years,” said Caryl M. Stern, president and CEO of the U.S. Fund for UNICEF. “COGIC has stepped up every time we have reached out to them, providing support for UNICEF’s water and sanitation, nutrition, health, education, and protection programs for children around the world.” 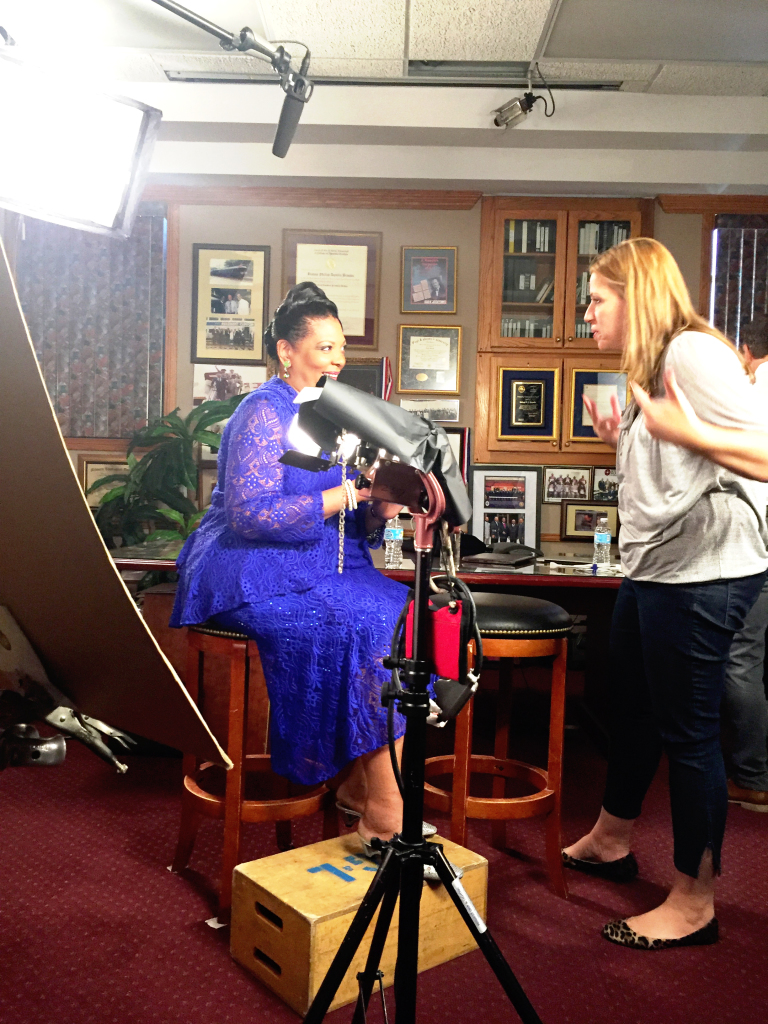 (L to R) Evangelist Faithe Brooks shares an informative movement behind the scenes with Helene Vallone Raffaele, Vice President, Direct Response and Integrated Monthly Giving of the U.S. Fund for UNICEF as they are shooting some of the first direct response TV spots for the organization with a person of color as the face and voice of the campaign. The spots are currently airing every Sunday at 3:00 p.m. (EST) on the Word Network.

“We are more than enthused to have partnered with the U.S. Fund for UNICEF to support UNICEF programs on the frontlines to combat many health and social related issues in the heart of the most vulnerable communities around the globe. Although the black church has been working in places like Africa since the early 1900’s, having the relationship with UNICEF only enhances our distinctive ability to expand our missions to an unparalleled level of expertise,” states Bishop Brooks, First Assistant Presiding Bishop of COGIC.  “We encourage everyone to watch our new program on every Sunday on the Word Network at 3:00 p.m. (EST) to see the new DRTV spots that both my daughter and I are very thrilled to participate in and support.”

The DRTV spots were shot on location in Detroit at Bishop Brooks’ home-based church. The Bishop is a member of a Faith-Based Leadership Consortium, which was formed in 2014 to assist the U.S. Fund for UNICEF in spreading its brand presence and mission to a more diverse & inclusive audience around the U.S. Through this unique partnership with the Consortium, The U.S. Fund for UNICEF has not only raised over $100,000, but has garnered a greater respect for UNICEF’s mission with the ever-growing minority population.

“We are honored that Bishop Brooks and his daughter Faithe are helping the U.S. Fund for UNICEF reach new audiences in the African-American community that includes not only faith-based organizations, but other key membership groups and associations,” said Edward G. Lloyd, Chief Operating Officer and Chief Financial Officer of the U.S. Fund for UNICEF. “We hope that through this collaboration we can connect members of the African-American community with UNICEF’s work on behalf of the world’s most vulnerable children.”

Members of the Faith-Based Leadership Consortium include Dr. Calvin Butts, the Pastor of the Abyssinian Baptist Church in the City of New York and the President of the State University of New York College at Old Westbury; Dr. Williams B. Moore Chairman, Chair of the Foreign Relations Committee, National Baptist Convention, USA; Dr. James C Perkins, 20th President of the Progressive National Baptist Convention, Inc.; and Bishop P.A. Brooks, First Assistant Presiding Bishop on the presidium of the Church Of God In Christ, Inc.

The Church of God in Christ is one of the oldest Pentecostal denominations in the World and the 4th largest Protestant group in the United States with churches in over 82 countries worldwide and a membership of nearly 6.5 million adherents.

About UNICEF
The United Nations Children’s Fund (UNICEF) works in more than 190 countries and territories to put children first. UNICEF has helped save more children’s lives than any other humanitarian organization, by providing health care and immunizations, clean water and sanitation, nutrition, education, emergency relief and more. The U.S. Fund for UNICEF supports UNICEF’s work through fundraising, advocacy and education in the United States. Together, we are working toward the day when no children die from preventable causes and every child has a safe and healthy childhood. For more information, visit www.unicefusa.org.