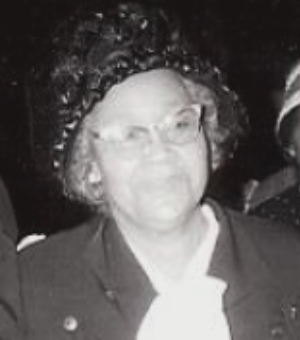 Mother Bailey, as she was affectionately called, started her religious career at an early age. As a child she was trained by her parents to be faithful to the church. She was a dedicated and ardent Sunday School attendee and youth worker. Her father was a Baptist minister. The strict training and discipline of her mother and father served as a guide in preparing her for her future life in the Church of God in Christ. It was in her early twenties that she received the baptism of the Holy Ghost and started working for the Lord. The fire of evangelism burned deep in her heart. She pioneered new work and dug out churches with her street-corner ministry, playing the guitar, singing, praying and teaching until souls were saved.

She served many years as Supervisor in New Jersey and Maryland. In 1934 she married Bishop J.S. Bailey, an outstanding officer of the church who later became a member of the General Board. He was her faithful companion and escort. Mother Bailey served as the first financial secretary to the first national mother, Mother Lizzie Robinson; Assistant International Supervisor to Dr. Lillian Brooks Coffey and as Vice-President of the International Women’s Convention.

She had a very close relationship with founder and senior Bishop Charles Harrison Mason and his family. She served as governess to his children for a number of years. She traveled as a companion and secretary

to Bishop Mason in his declining years. He spent many happy hours in the Bailey home in Detroit,Michigan. She organized women everywhere, supported pastors and their wives and families and taught other women

to do the same. She rightly earned the name she was fondly called by the brethren, Darling of the Brotherhood, Sweetheart of the Church. Under the supervision of Dr. Bailey the work that she loved continued to grow and prosper. The units that she added were the: Business and Professional Women’s Rescue Squad, Sunday School Representatives Unit, United Sisters of Charity, National Secretaries Unit, Jr. Missionaries, renewed the women’s magazine (The COGIC Woman) and appointed the first National President of the Sewing Circle-Artistic Fingers. During her tenure she presided over eleven women’s conventions, 1965-1975, several of which her daughter Clara attended with her. Mother Bailey was a woman of wisdom and left a great legacy. Her words will never be forgotten. They are echoed across the general church: “When you have done your best, the angels in heaven can’t do any better; When you have done the best you can do, that’s all the Lord requires.”  Written in 1972, the following are excerpts from a letter that she addressed the women as “Dearly Beloved” exhorting them to grow in spiritual maturity giving these life changing idea: “Broaden your vision: Win, don’t repel: Communicate, Listen, Understand and Care; Be more ready to hear than to talk; Keep Learning; Be yourself: Give as you would get; Don’t jump to conclusions; Take time to think: Pray, until you touch the source; Ponder this “In everything, give thanks; Above all my darlings, Stand Fast and hold the traditions we have been taught, so that our own work can praise us in the gates.