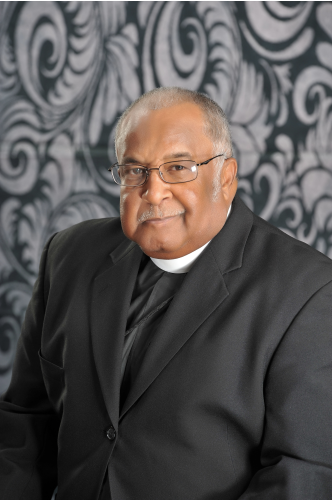 3rd Vice President Wilfred Brown, Jr., a native of Gretna, Louisiana, McDonoghville area, was a product of the Jefferson Parish Public School system. First, he attended McDonough 27 and then Lincoln High School where he played football and was the team Captain.  As a football player, he made “All District”, “All City”, and “All State” as a defensive back.  He also ran track and was the recipient of the Mayor White Award for being the best athlete in the city of Gretna.  He was also a part of the American Legion and Jefferson Parish Junior Deputies.  Being a graduate of Southern University of New Orleans in Secondary Education (Physical Education) as well as Special Education, landed him at Helen Cox Middle School as Head Coach.

Vice President Brown is presently the Pastor of Evariste Temple Church of God in Christ in Gretna, Louisiana. He is also the Jurisdictional Sunday School Superintendent and AIM Chairman in Louisiana East Second Jurisdiction. Brown works with the International Sunday School Department’s (ISSD) Finance Team, and is the Chairman of The Board of Superintendents of the ISSD.  Moreover, he is also the 3rd Vice President of the International Sunday School Department.  Vice President Brown is married to Missionary Doris S. Brown, is the father of three:  Bryanne Brown Bellman, Susanne Brown Robinson and Brian A. Brown, Sr., and has been an employee of Conoco Philips for 33 years.