The Church Of God In Christ (COGIC), which is composed of an estimated six million members in 87 countries around the world, stands in solidarity with the African American community in St. Louis in their protest of the recent verdict in the 2011 killing of Anthony Lamar Smith by former white police officer Jason Stockley. As pastoral leaders, we understand the frustration and outrage of citizens at yet another failure of justice regarding the shooting death of a black man at the hands of a police officer.

As COGIC holds its 110th Annual International Holy Convocation during a time of outrage and grief, we are compelled to work in the interest of justice. We encourage lawful protests that seek the redress of grievances and offer our prayers for the family of Mr. Smith and the entire community. As an organization, we have been responsible for generating over $125 million dollars in the St. Louis regional economy over the past seven years, so we must also challenge responsible parties to correct the wrongs of a justice system that is deeply broken. We thank you for your willingness to meet with our delegation to discuss strategies to improve police-community relations and to address the concerns of residents.

We are concerned about both the actions of former officer Stockley and the way law enforcement and its administration is carried out. We unequivocally affirm the excellent job that many police officers do daily. We appreciate the fact that police officers literally put their lives on the line daily. Yet, we cannot ignore the fact that there are numerous citizens who have experienced unjust targeting, humiliation, loss of physical freedom, and even physical harm at the hands of a relatively few St Louis police officers.  The historical record will show that this is not a new phenomenon, nor simply the perspective of a few troublesome activists. Many residents have lost faith in both the complaint and investigatory processes as they now stand. Central to this are basic questions regarding the fairness of current practices for investigating complaints regarding police behavior.

COGIC supports the community’s demand for independent investigations by another law enforcement agency into police involved shootings resulting in serious injury or death. When officers use deadly force, the public has a right to expect that a thorough and impartial examination will be conducted and that all involved parties will be held legally accountable for their actions.

Confrontations where deadly force is used deserve special handling at all levels. Such incidents can have a significant impact on the relationship between law enforcement and the community they serve.  It is important that very specific and formal protocols include mandatory independent investigations.

From a broader perspective, a police department’s reputation within the community and the credibility of its personnel are largely dependent upon the degree of professionalism and impartiality that the department can bring to such investigations. Internal investigations of police-involved shootings in general and where citizens are wounded or killed cannot afford to be viewed dubiously by the community. This will only continue the devastating impact on the professional integrity and credibility of the entire department. Millions of taxpayer dollars have been spent to settle cases where police officers were cleared of criminal conduct.

The circuit attorney’s office must insure the integrity of investigations into police conduct. That office faces an almost hopeless conflict-of-interest in objectively handling cases involving potential police misconduct because, in most cases, the office must simultaneously investigate allegations against the police while examining police charges against the victims in the same case. Over the years the office has been reluctant to vigorously pursue investigations into the police or to prosecute misconduct. We strongly support the appointment of an impartial entity to pursue investigations in police-involved shootings.

In addition to investigations of police involved shootings, COGIC stands in agreement with the following other community demands:

Body Cameras: The devices arguably provide solid evidence of a police officer’s actions. St Louis officials should support legislation to make it a criminal offense for police not to wear issued body cameras or to properly upload the footage.

Subpoena Power for Citizen Oversight Board: After Michael Brown’s death, St. Louis aldermen created the Citizen Oversight Board to consider allegations of police misconduct. However, the board doesn’t have the ability to compel police officers to testify. To ensure transparency and real citizen participation in police oversight, this board must be granted statutory authority.

Adopting the Ferguson Commission Report: The Ferguson Commission report, released in 2015, includes dozens of law enforcement, education and public health recommendations. Some of the police-related ideas include increasing racial sensitivity training for officers and creating a database that tracks whenever an officer kills someone. We support the implementation of these ideas where feasible.

We must stand with black people, and any others, who feel threatened and violated by those who are sworn to protect them. We reiterate that the Church of God in Christ has invested over $125 million dollars in the St. Louis regional economy over the past seven years, with the likelihood of investing an additional $36 million dollars over the next two years. We are obligated to urge strong consideration of steps to ensure that there will be justice in police-involved shootings. We also support the enactment of necessary systemic changes in this critical area. In response to community concerns, COGIC supports our members engaging in orderly and peaceful direct action during our conference. Movement toward the goals and initiatives outlined above will greatly impact our deliberations regarding where to hold future convocations and other conferences.

Every effort must be made to blunt reasonable cries for transparency and to give the community greater confidence. We call all community stakeholders to speak clearly, in a unified voice against police misconduct and for systemic changes in the best interest of the entire city of St. Louis. The Church of God in Christ leans on the one whom we follow, Jesus, to guide our prayers, our protests and our actions. In that spirit, we will continue to pray; to stand with the “least of these;” and to act on the side of justice. COGIC looks forward to working with elected officials, the police, clergy, social justice and other community organizations, and residents to address the many serious concerns in the current climate of racial discord. Let us together work to create a beloved community as espoused by the late Rev. Dr. Martin Luther King, Jr. 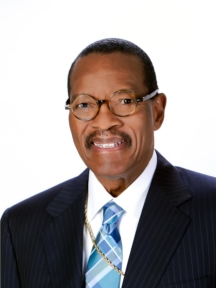 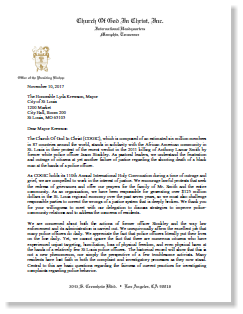